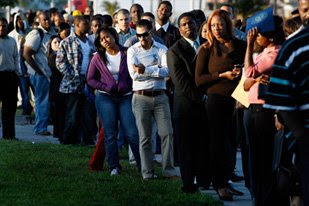 US unemployment has risen to 8.1 per cent, the highest level since December 1983, according to a US government report.
The US labour department report said on Friday that 651,000 jobs were lost from the struggling US economy in February.
Al Jazeera's John Terrett in New York said the figures were worse than many analysts had been expecting.
The US labour department's monthly report is seen as one of the best indicators of the state of the world's largest economy, which has struggled amid a global downturn and financial crisis.
Unemployment in US has now reached the highest level since December 1983, when the jobless rate was 8.3 per cent.
There are now 12.5 million people unemployed in the US, the highest number since record keeping began in 1940. Despite the news US stocks closed slightly up on Friday, with the Dow Jones Industrial Average rising 35.84 points, or 0.54 per cent, to 6,630.28 points. The US economy also lost 681,000 jobs in December and another 655,000 in January, the report said, revising earlier figures upward.
The figures put December's job losses as the worst on record since October 1949, officials said. In addition, the number of people forced to work part time for "economic reasons'' rose by 787,000 in February to 8.6 million, the report said.
Barack Obama, the US president, pledged to take action following the release of the report.
"It brings the total number of jobs lost in the recession to an astounding 4.4 million," Obama said, at a graduation ceremony for police cadets in Ohio who had their jobs saved by investment from Obama's $787bn economic stimulus plan.
"We have a responsbility to act and that is what I intend to do as President of the United States of America."
'Long-term threat'
Stephen Overall, an analyst from the London-based Work Foundation policy group, told Al Jazeera the global economic crisis was likely to get a lot worse in the coming months.
"We can rest assured that as the recession deepens, unemployment figures are likely to mount up.
"It is also important to remember that when economies return to growth, it can take a number of years for employment to bounce back again to pre-recession levels.
"For example, it took the UK six or seven years to return to what it was to the recession of the early 1990s, so it's quite a long-term threat until we see things return back to normal again".
Stimulus package
US companies are struggling with falling revenues, leading them to cut jobs in huge numbers, a step that is forcing households to further cut spending, creating a vicious cycle for the economy.
The Obama administration has introduced a massive economic stimulus package, in an attempt to boost the economy through government spending and tax cuts.
The news comes at the end of another bad week for the US economy, in which AIG, the insurance giant, reported $61.7bn quarterly losses, the worst ever for a US company.
On Thursday, auditors also reported "substantial doubts" over the future of General Motors, the US vehicle manufacturer, which is also struggling with huge losses following a sales slump.